March is right here and festival season is coming. As you know, here in CMFFG Punk, we like going to the bone of the matter and to discover what it takes to organize a festival. Talking about next summer, this year our eyes are set on the italian Bay Fest, a kind of somophore festival which is growing real quick year by year. We had the chance to talk to Stefano Gardelli, one of the seven founders of the gig and a great and friendly man who shared with us all his experience and his future dreams as a promoter. Don’t miss the interview and keep checking festival Facebook once in a while, big names are waiting to be announced.

– Let’s start from the very beginning, where and when did Bay Fest Festival start?

Bay Fest is actually a young festival, first edition took place just two years ago, in mid- August 2015 with Millencolin as headliner (and who better than them?). They played in a stage nearby the sea, people continued to dance all night long… That summer was magic!

–  Was that your first experience as a promoter? (if not, explain your origins)

Me, like other LP Rock Events members, come from other experiences as events/shows organizers, someone promoted to his own band, someone else was involved in a small concerts agency that has never taken off. To talk about the my first time, we need to go back to the 00s, when I co-founded an indie label which closed its doors over 10 years ago. Yes, we know how obstinate we are.

–  Which were Bay Fest goals back in those times? have they been covered?

The first Bay Fest edition come up from an insane idea of 7 guys who did not know what they were facing (and we actually still didn’t), with the sole purpose of organizing a mid- August festival punk-rock themed. We did everything in a rush, we were already late before we started. As the days went on, it became clear that our main goal was to grow- up. More bands, more party, more people, more days, more fun, of course with the obligation to cover the costs. Each goal has been achieved, we are satisfied, even if we forgot what it means to sleep peacefully.

–  Nowadays and after 3 editions, the festival is becoming really popular among European punk rock fans. This year edition is going to be a 3 day festival with a lot of new stuff, could you tell us if you ever expected this development?

As I mentioned previously, that growth was intentional. Today, for example, we have to look forward to 2018. Improving and enlarging the festival encourages us to give of our best. If, Bay Fest 15 was a National punkers destination, then Bay Fest 16 quickly turned into a European target, well then the next step is already written. 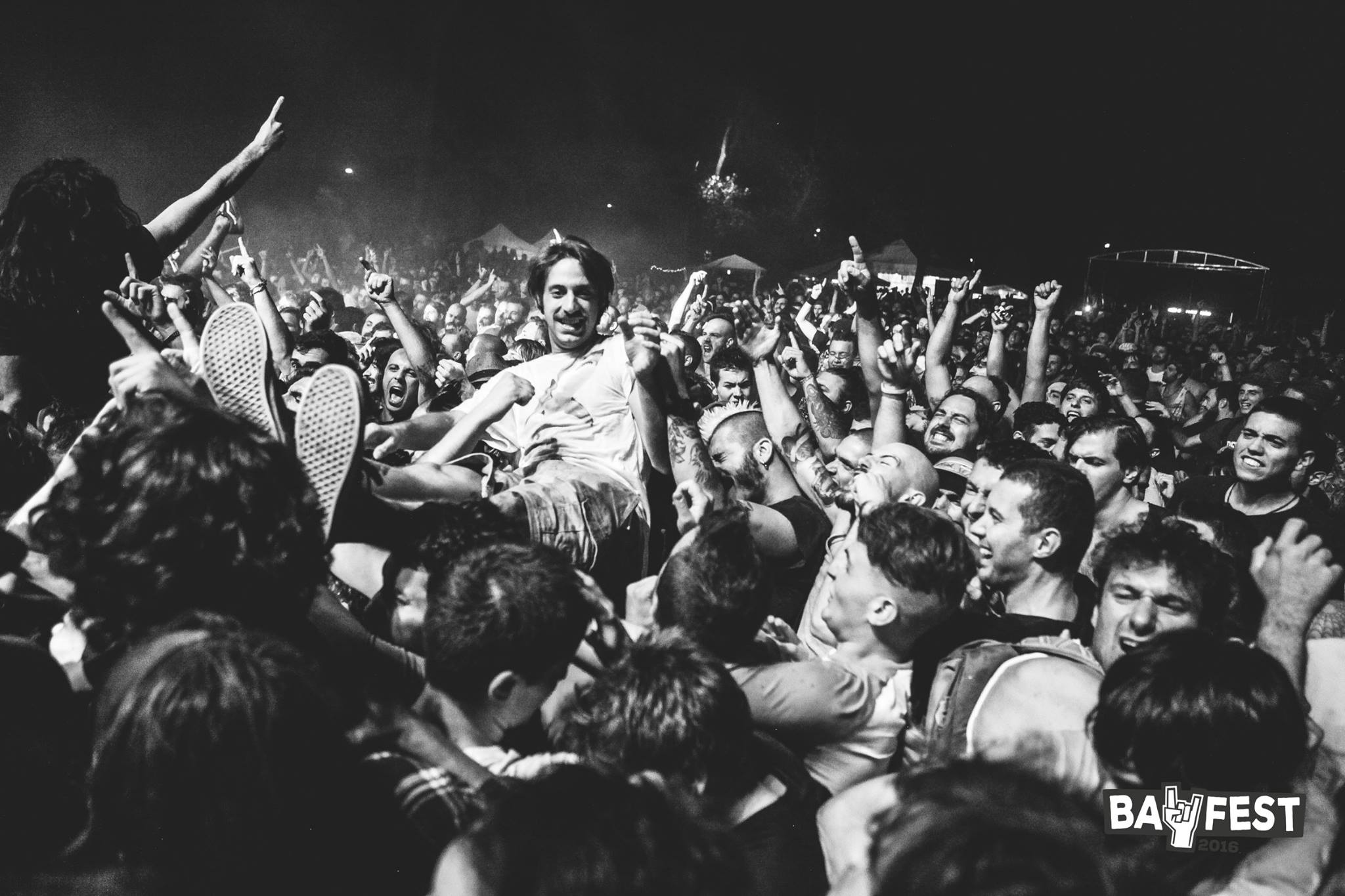 –  What new things will the audience find in the festival next summer?

Great question, first of all we’re trying to satisfy the crowd’s demands, comments and users feedback, especially constructive ones, then certainly the venue organization will improve, there’s one additional day to a very cheap price, the number of bands on stage has increased while the price have fallen, Bay Camp will be greater than last year, the drinks and food services will be speeded up with the introduction of Bay Currency… We can expect several innovations, too much to be remembered!

–  What does it take to organise a festival like Bay Fest nowadays?

We are still new at this game, then we’re inevitably moving slow, so we spend a few hours a day for the realization of bay fest, 11 months out of the year (there is a month in witch the use of words “Bay” and “Fest” is forbidden).

–  How many people take part in the organization? What about security, bartenders, volunteers?

We have seven founders, including four partners, each of us leads a small staff made of friends and volunteers, in total 15-20 people are involved in the event. If we add up all the workers you have listed, together with rodies, riggers, press officers and full staff, we probably get closer to 100 employees. I just learned the machine that works pre, post and behind the stage of a show is huge and it’s unbelievable how each role is crucial, everything have to run perfectly, or it should.

–  As a punk rock music lover, do you usually go to other music festivals? Do you take any ideas from them?

Of course! First, we all are fans. I, as much as the others, enjoy concerts and festivals. In the last three years we are bound to watch every show with critical look, now we can see some details we haven’t noticed before, learning tricks and making us able to consider it seriously in order to adapt them to our format.

–  Let’s talk about the audience, Could you tell us where they usually come from?

It’s satisfying to receive messages and notice that people from all over the world do care about Bay Fest. Tickets were sold in our neighborhood: Austria, Germany, Switzerland, Spain, Greece and France, but it’s also been a remarkable sale in distant countries like Australia, USA, Mexico, England, Sweden, Finland, Scotland, Argentina and many others… Our thoughts go out to the music as a universal language, we are delightfully pleased about that.

–  One of the coolest things of Bay Fest (besides the punk rock) is the beach. Could you explain us the environment and the feelings people find in such a cool place?

We were all raised on seaside, we need to combine beach and party, it’s kind of an automatic mechanism we never get tired about. A 3 day festival with the chance to jump into the sea, sunbathing on the beach and enjoy the sunset is same time fun, charming, romantic and distinctive. Don’t act like punks, bring your sunscreen.

–  Is Rimini scene a famous punk rock scene or is Bay Fest a chance for bands to discover the area?

Both things are important, the Emilia Romagna region is pumping with punk rock from the old days, predicted by several alternative clubs and very active local bands, but sometimes we need to shake this place up! We never thought that punk was dead, it just needed a rest because it’s a bit old.

–  Could you give us some italian bands we should keep an eye on?

Happy to do that, so: Airway, Girless & The Orphan, Lantern, Höney, Ricordi?, Urali, Edward In Venice, ActionMen, I.S., Heartfall, Lags, Forty Winks, 7Years, The Manges, June And The Well, Shandon, Slander, if we even count those who have broken up I suggest you Naftalina, Cases and Kurassao Kojak! 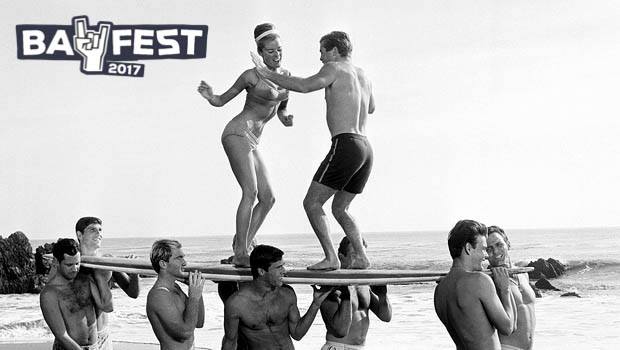 –  Which are your current goals as a festival?

We must come full circle. Everything should go right so as to allow a subsequent edition, we are really counting on the audience both concerning affluence and regarding behavior and feedback. A second essential goal concerns the staff: it’s imperative that everyone enjoy their time. Great importance to the artistic side too, we hope that artists give us great performances, we will try to adapt and facing up to it!

–  How do you imagine Bay Fest festival in 10 years time?

I picture it ike a village that mixes art and entertainment, that comes and goes in three days, a big event with two or more stages, many attractions, people who come from all over the world regardless of the artistic cast, 24 hours a day of shows, attractions, choreography and something never before immagined

–  Just to finish, what would you say to our spanish readers about the festival? What Does Bay Fest offer so more spanish people decide to visit your great festival?

At this very time, I’m studying and working on ways to expose Bay Fest to the potential fans who lives in the Iberian Peninsula, then, since CMFFGP is a Spanish webzine, I’ll try to find something appealing. You already have beaches, good food and beer too, regarding music and people caliente you have only to teach to the world, but we’re attempting to include all these elements and many more in three days, ah yes there will be a mess of gadgets, Italians actually enjoy these things.

– Thank you very much for your time and your hard work. It feels great to meet people who still work for the love of punk rock. Is there anything you want to add to this interview?

Thank you and thanks to the entire Call Me Fat Geriatric Punk (that I’ve just learned to say without reading) staff. Perhaps it would be appropriate to get this over giving a lecture that embraces the meaning of music and how to be part of it but I’m afraid I’ve been pretty boring and, if you’ve read the interview up to this point, I think you really deserve a Bay Fest vacation this summer

August is just a few months away, and tickets are being sold fast. Don’t forget to check Bay Fest Facebook to get more info, more bands announcements  and to buy tickets. See you guys in Italy!